You'll love him, trust me!

I love working with the Amazing Arthur, this guy is both funny and professional. He was the perfect addition to our event. You'll love him, trust me!... read more

The amazing Arthur was just that Amazing.

The amazing Arthur was just that Amazing. He adapted this show to a group of 50, kept everyone entertained and wowed! Thanks Arthur!... read more

Arthur Fratelli refers to himself as a professional show-off and it makes a lot of sense, too! With his versatile humor and passion to entertain, Arthur can ensure that your San Bernardino event is a truly memorable one.

The Amazing Arthur finds it very effective when he performs with the crowd instead of just performing for the crowd. This gives attendees a wonderfully unique and immersive experience as well as highlights Arthur’s amazing ability to improvise and think on his feet. If you’re looking to give everyone in the room a once-in-a-lifetime, side-splitting experience with some good clean fun, Arthur Fratelli is the San Bernardino event comedian you’re looking for!

Arthur Fratelli is practically a full entertainment package, and he’s ready to use his 60-minute show to help you meet your San Bernardino event goals! 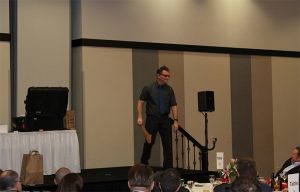